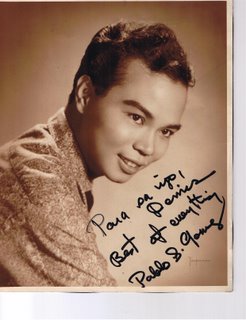 Pablo S. Gomez is one of the Philippines' greatest komiks writers. A prolific writer, he has written innumerable komiks short stories and holds the record for the most komiks-nobelas written by a single author: more than 200 nobelas. (Mars Ravelo once held the record, but he died earlier and Pablo still writes to this day)
Pablo is the last of the great komiks-writers from the Golden Age of Philippine Komiks, an era when komiks writing reached its pinnacle because of Gomez' and his contemporaries (Clodualdo del Mundo, Francisco Coching, Mars Ravelo, and Tony Velasquez)writings.
Gomez' more famous komiks-nobelas were Kurdapya, Eva Fonda, Pitong Gatang, MN, Kamay ni Hilda, Recuerdo, Susanang Daldal, Taong Buwaya, Batang Bangkusay, Pagbabalik ng Lawin, and of course, Kampanerang Kuba.
"I was writing for as long as I can remember it", he smiles. "Komiks writing comes naturally for me, its just like a normal thing to do everyday, just like eating"
In 1963, when Ace Publications closed down due to labor strike, Gomez started his own publications company, the PSG Publications. It published such titles as United Komiks, Continental Komiks, Universal Komiks, Kidlat Komiks, and Planet Komiks. His publications company started the careers of many great komiks artists and writers like Alex Nino and Carlo J. Caparas, to name a few.
For a time, PSG became the biggest rival of GASI, until Pablo was forced to close the company due to the slump in the komiks business because of Martial Law. Yet, he never stopped writing. He has hundreds of stories and scripts still unpublished to this day, all of them he kept stored in his steel file cabinet, or on top of his table, or under his oval bed (which was a gift by his friend Ms. Susan Roces). Up to now, Pablo never gets tired of writing, and everytime I visit him in his home, I usually find him in front of his vintage typewriter creating new stories and plots for the younger generation of komiks readers. One can only wonder at the sheer force of his imagination and the vastness of his knowledge.
Indeed, like his craft, Pablo is ageless, and like his greatest works, he is immortal.
Posted by Dennis Villegas at 9:36 AM

Thank you Wylz, at sana ituloy mo yang plan mo to be a comic book artist :)

my mother, LORENZA ISIDRO NAVEA, a post stroke patient and classmate of Pablo S. Gomez at Legarda Elementary School wants to see him. Is there a way we can reach him?