The Essential Guide to World Comics 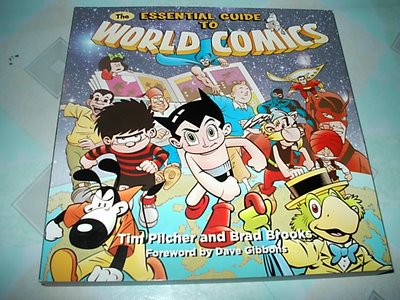 I finally bought a copy of "Essential Guide to World Comics" after being tipped by my friend Reno Maniquis that it is already available in Powerbooks.
I think this book is very important since it is the first book to examine in relative detail the comparative comics culture of the different countries of the world.
I am very glad that the rich Philippine comics tradition, hitherto neglected by international comic historians, has earned a generous space in this book, as it relates the unique contributions of the Filipinos to world comics.

Tony Velasquez, the Father of Philippine Comics, was also chosen by authors Tim Pilcher and Brad Brooks, as one of their choices for world class comics creators, together with Japan's Ozamu Tezuka, Argentinian Alberto Breccia, India's Anant Pai, and Belgian Herge, among the few selected others. 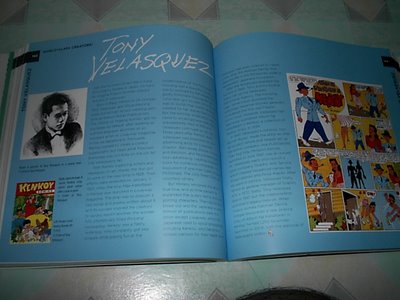 I am also happy to find on the cover of the book our very own Kenkoy(as well as on the back), happily at home among the world's immortal cartoon characters like Astroboy, Dennis the Menace, Captain Marvel, and Tintin.
Interestingly, the book focuses more on the other lesser-known comics industries of Thailand, Vietnam, Hongkong, India, and many other Asian countries.

The Philippines occupies some six pages in the book (including the two-page tribute to Tony Velasquez), as well as some mention on the other sections of the book.

Also noteworthy are the sections on Africa, Europe, and the rest of the so-called "non-manga" and "non-superhero" comics industries.
Perhaps comics researchers and scholars may find the book to be disappointingly too brief and general, but I think the authors succeded in putting together in one compact, fascinating, and lavishly illustrated book a real essential guide to world comics, for the comics enthusiasts and collectors. Or for just anyone with even the slightest interest in comics.

So go ahead and treat yourself a tasteful of a book, and don't expect to borrow someone else's copy, I bet they will never lend their own copy :-)

Posted by Dennis Villegas at 6:03 AM 4 comments: Links to this post

Finally, here's a gallery of some of the earliest komiks covers of the great Francisco V. Coching from my collection. For your viewing pleasure. 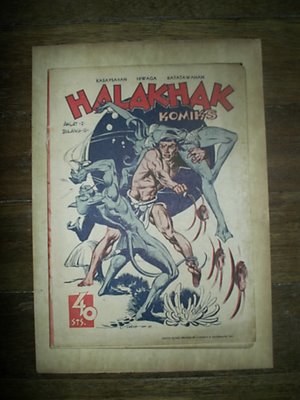 Halakhak Komiks #9, 1946. This is the only Coching cover for the extremely rare Halakhak Komiks, featuring Bulalakaw, one of his early komiks characters. 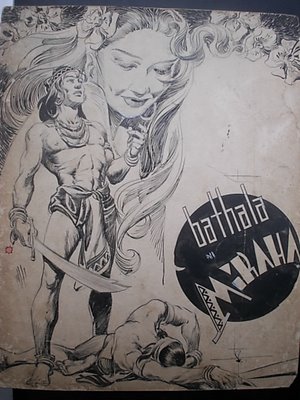 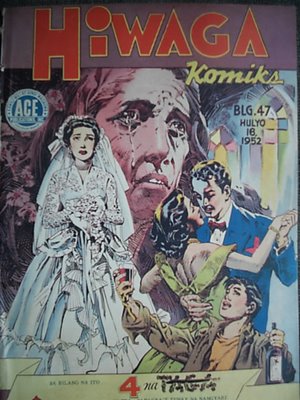 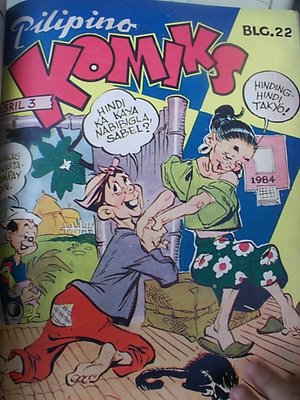 Pilipino Komiks#22, April 3, 1947 . Unknown to many, Coching was also a master of the cartoons, as shown in these following covers for the early issues of Pilipino Komiks. Actually his first comic strip in the Pilipino Komiks was Paloma, a cartoon character about a worldly and hilarious young Filipina who was possibly influenced by Tony Velasquez' Ponyang Halobaybay cartoons in the 1930s. 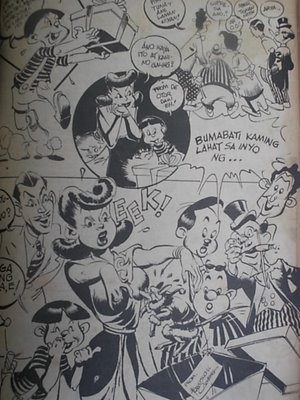 Paloma, the first cartoon character of Coching in Pilipino Komiks, 1947. 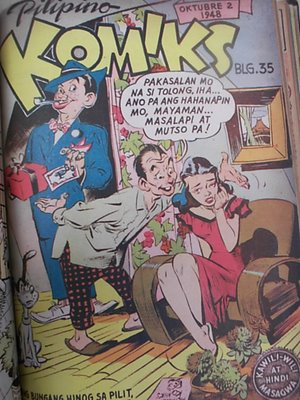 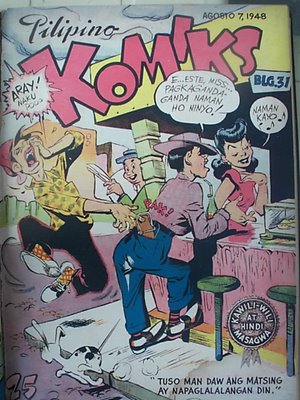 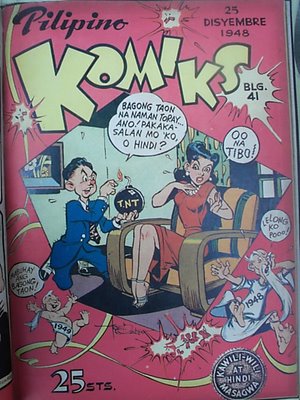 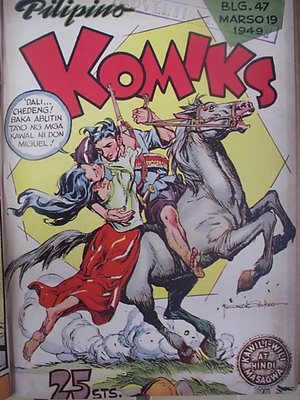 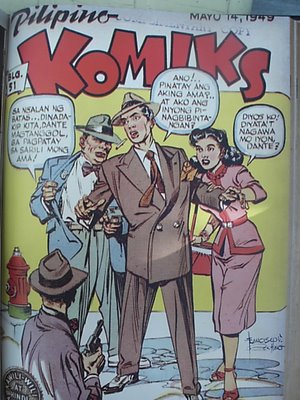 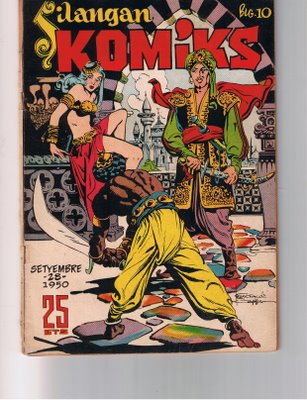 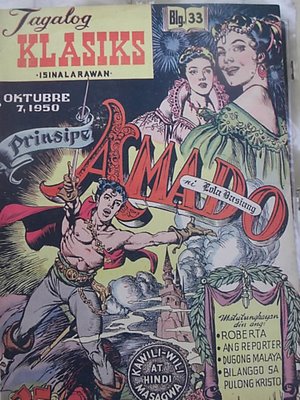 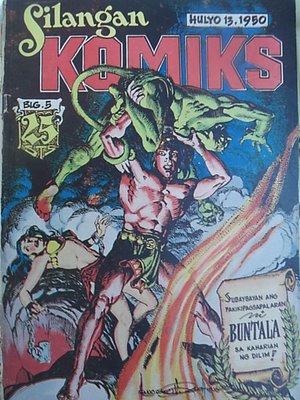 Silangan Komiks #5 July 13, 1950. This is one of my favorite Coching covers.
Posted by Dennis Villegas at 8:33 PM 6 comments: Links to this post

The very first Pinoy komiks superheroes appeared in 1946, right at the birth of the Philippine comics industry. Incidentally, that year also marked the independence of the Philippines from the United States, after surviving the destructive three-year Japanese Occupation.

After the war, a few enterprising individuals started the very first komiks-magazines in the Philippines: Halakhak Komiks and Pilipino Komiks. Although Halakhak Komiks did not contain any serious superhero story, it had, on the other hand, a Pinoy funny superhero called Siopawman, created by a young cartoonist named Larry Alcala. 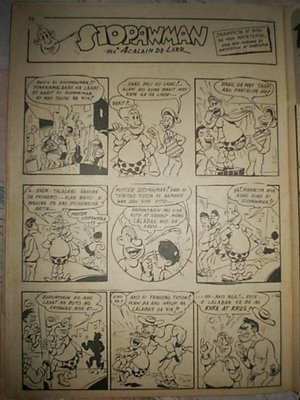 Siopawman by Larry Alcala may be the first, albeit fumbling, Pinoy komiks superhero.

The first true Pinoy komiks superhero was Ipo-ipo, a character created by Lib Abrena and Oscar del Rosario in 1946 in a Tagalog magazine called Magasin ng Pagsilang.
Ipo-Ipo is an interesting character, he gets his superpowers from the whirlwind. He acquires the speed of the wind and bullets fired into him just pass through his body.
Fresh from the horrors of the Japanese invasion, Abrena and Del Rosario pitted Ipo-ipo against the ruthless Japanese soldiers who refused to surrender, even after the unconditional capitulation of Japan in 1945. 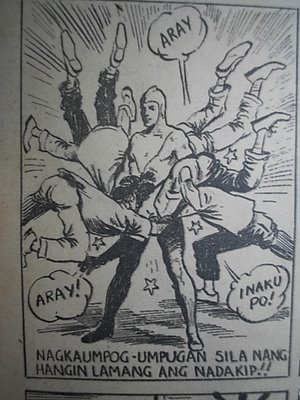 Ipo-Ipo, the very first true Pinoy superhero: how can you beat a superhero that you cannot hit?

Lagim first appeared in Pilipino Komiks #1 in 1947, created by Cris Caguintuan. Like Ipo-ipo, Lagim battles the Japanese forces who would not surrender. Lagim gets his power from a headgear given to him by a scientist named Dr. Malasakit. The headgear makes Lagim's strength twice that of a man. Unlike Ipo-ipo, Lagim is vulnerable, he could be hit by bullets. Yet, luck and his double-strength was enough to defend people from the evil forces.
He later saved a boy named Levy who became his sidekick. 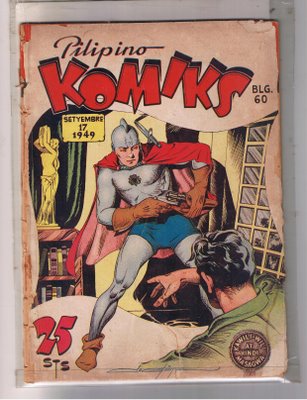 Possibly influenced by Batman, Lagim even had a sidekick named Levy, whose costume was similar to Robin.

In July of 1947, Mars Ravelo created Varga in Bulaklak Maazine. Varga was actually the first Darna, and she also had an alter-ego named Narda. When Ravelo left Bulaklak and was hired in Ace Publications, he re-created Varga and renamed her Darna. 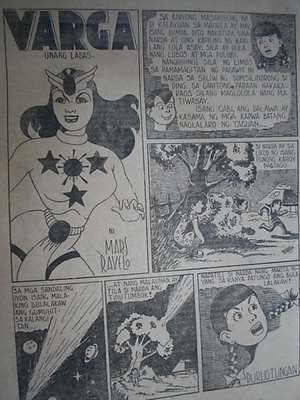 In 1950, Darna appeared in Pilipino Komiks, re-created by Mars Ravelo and superbly illustrated by Nestor Redondo. The first story of Darna tells of her battles against the evil Valentina.

A TRADITION OF PINOY KOMIKS SUPERHEROES

More than any other superhero, Darna opened the floodgates of superhero stuff in Philippine comics. Aside from being the first komiks superhero to capture the attention of Pinoy komiks readers, Darna also lay claim as the first superhero to appear in the movies, with Rosa del Rosario in the lead role.

Indeed, throughout the years, Darna's commercial appeal proved her ultimate strength. In the 1970s, there were more movies about her, the top female stars of Philippine movies personifying her like Vilma Santos, Liza Moreno,Anjanette Abayari, to name a few. In mid-1970s, there was even a komiks named solely after her:Darna Komiks.

Captain Barbell is another creation of Mars Ravelo, suited for the masculine readers of his komiks. Captain Barbell first appeared in Pinoy Komiks in 1963, and was superbly illustrated by Jim Fernandez. 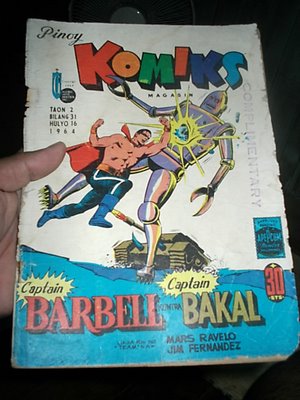 Like Darna, Captain Barbell also had an alter-ego named "Tenteng", who is socially disavantaged,i.e., poor, and not very good looking. In the beginning issues of the komiks series, we see Tenteng being maligned by people above his social class, rejected by the woman he loves because he was ugly.
In a society in which the poor outnumbers the rich, Captain Barbell struck a chord among Pinoy komiks readers. Finally, here is a superhero whom they can identify with. Someone whose kindness at heart had blessed him with a superpower, the superior strength and the ability to fly, to help those who are poor and dowtrodden.

Captain Barbell also had his fair share in the movies; his character was personified in the screen by Dolphy, Bob Soler, Herbert Bautista, Edu Manzano, Bong Revilla, and Richard Gutierrez, being the latest.

More than any other komiks writer, it was Mars Ravelo who entrenched the tradition of superheroes in Philippine komiks. He had created more superheroes than any other Filipino comics writer. Yet, one can see that most of his superheroes were rooted from the poor and the disadvantaged, yet gifted with the values that are truly Filipinos. His superheroes are humans too, after all, they have their weaknesses, their human traits, and most of all compassion even for their enemies.

Why would Mars Ravelo concentrate so much on superheroes whose alter-egos are poor and downtrodden? Perhaps the answer lies within his own personal experiences. Mars grew up poor in a poor society. He tells of his experiences that he was so poor he was barely able to go to school. He never finished schooling though. "My teachers never liked me", he said, "And I never liked my teachers".

His first job was a janitor. Ravelo said "In everything I do I wanted to be #1, and when I became a janitor, well, I wanted to become the number 1 janitor"
Well, he did. It was in his personality to give his best in his every endeavor. And so, when he became a komiks writer, he was damned the best among them. Wether it was superhero stuff like Darna, or comedy like Buhay Pilipino, or heavy drama like Roberta, Ravelo was peerless.
I think Ravelo can truly personify his superheroes. He had lived like one. 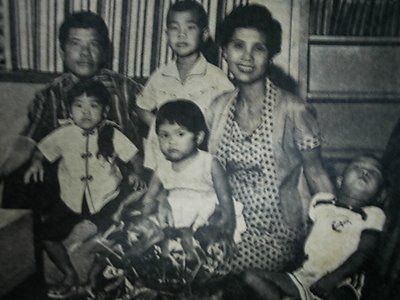 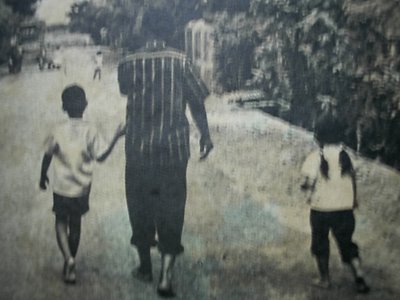 A barefooted Mars Ravelo, with two of his children, walking towards his fish pens in Cavite. Circa 1960s.

Posted by Dennis Villegas at 6:40 AM 8 comments: Links to this post