The Beginnings of the Philippine Komiks Industry

Although Ace Publications dominated the Philippine komiks industry in its early years, it did not monopolized komiks production because other publishers began to venture into komiks publishing as well, inspired by Ace's sucess.
The first publisher to break Ace’s monopoly in komiks publishing was Silangan Publications. In early 1950, it published the Silangan Komiks, the fourth komiks magazine in the Philippines, after Halakhak Komiks (1946), Pilipino Komiks (1947), and Tagalog Klasiks (1949). The Silangan Komiks was a few months older than the Hiwaga Komiks. 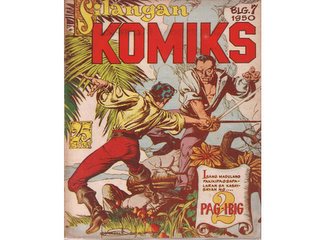 Silangan Komiks with a superb cover by Francisco V. Coching. Coching is well-known for his dynamic composition, which became the standard style in those days. Coching was often commissioned by komiks publishers to grace their covers even though Coching himself did not illustrate any of the stories inside them. At that time, Coching commanded the highest pay among Filipino artists, so that small-time publishers could not afford to hire him to illustrate for their regular komiks-nobelas. They were, however, contented to just having him as their cover artist.

Edited by Ben Cabailo, Jr., the Silangan Komiks' first issue appeared on March 15, 1950, and was afterwards published on a regular forthnightly basis. It boasted some of the youngest and most talented Filipino illustrators at the time: Nestor Redondo, Alfredo Alcala, Nolasco "Noly" Panaligan, Elpidio Torres, and Antonio de Zuniga. Of particular interest among the nice stories from Silangan Komiks was Prinsipe Ahmad, Anak ni Aladdin, written and illustrated by the youthful Alfredo P. Alcala. 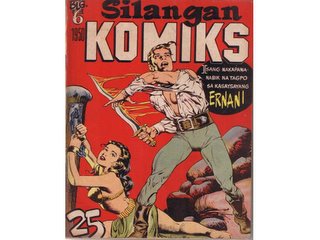 Another rare issue of the Silangan Komiks, this time with cover art by Nestor Redondo. During those times, a Redondo cover art was a sure way to make the komiks saleable.

A few weeks after the first issue of Silangan Komiks, another komikbook entered the komiks scene in 1950, the Aksiyon Komiks, published by Arcade Publications. Like all others before it, Aksiyon Komiks was published forthnightly, with writer Eriberto Tablan as editor, and with Alfredo Alcala and Virgilio Redondo as chief illustrators. 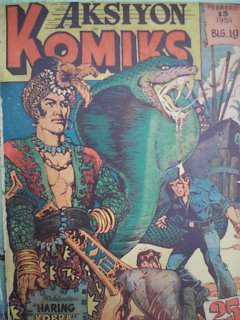 Since artists and writers were hired on a freelance basis, it was possible for them to contribute to rival publications. Hence, the indefatigable Alfredo Alcala worked as artist in many of these early komikbooks.
A few weeks after Aksiyon Komiks’ first issue, also in the year 1950, three more small time publishers entered the komiks publishing competition: F.J Quioge Publications, Social & Commercial Press, and All-Star Publications.

F.J. Quioge Publications published the first issue of Bituin Komiks sometime in April 1950. Edited by Kulafu creator Francisco Reyes, with Mauro Malang Santos and Menny Martin as his assistants, the Bituin Komiks was issued in an irregular basis. 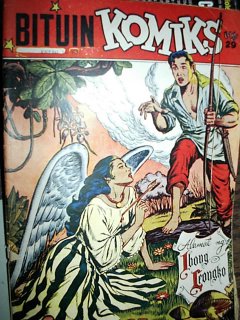 Owned by Dona Beatriz Guballa, known as "Dona Bating", the Social and Commercial Press later changed its name into Bulaklak Publications. It published three komikbooks: the Bulaklak Komiks in August 1950, Manila Klasiks in 1952, and the Extra Komiks in 1953. 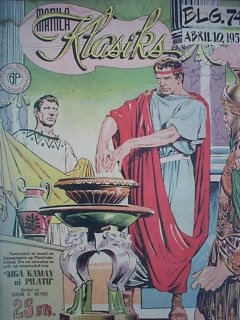 A rare copy of Manila Klasiks with a superior cover art by Tony de Zuniga. Author's collection. As an artist, De Zuniga was like a chameleon, often changing his styles to match his writer's ideas.

All Star Publications meanwhile published the Pantastik Komiks in October 1950, also edited by Ben Cabailo Jr. This was a sister piblication of Silangan Publications which issued Silangan Komiks (FOOTNOTE: I had an initial feeling that Silangan Publications and All-Star Publications were owned by Ben Cabailo although the editorial box did not mention the name of the owner. But in a casual conversation with Frank Redondo (younger brother of Nestor and Virgilio Redondo) sometime in 2004, he confirmed to me that he remembered it was indeed Cabailo who owned these komikbooks.) 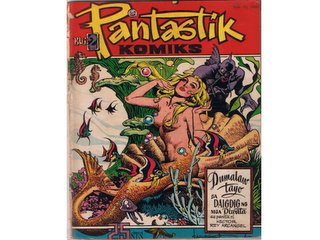 Most of these publishers had very small capital, had no printing presses of their own, or lacked the appeal to attract big advertisers. No wonder many of them died a natural death after only a few issues. None of them had equalled the success Ace’s komiks. 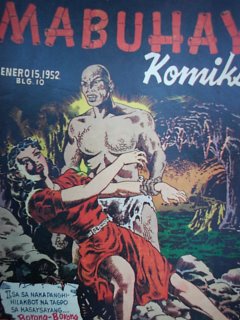 In fact by the end of the 1950s the Silangan, Bituin, Aksiyon, and Pantastik Komiks had ceased publications. With very little capital and lack of efficient distribution network, these komikbooks suffered the same fate of the Halakhak Komiks. The only saving grace for these komikbboks was that they contained some of the more visually appealing artworks by some of the budding artists at that time, like the Redondo brothers, Alfredo Alcala and Hugo Yonzon.

Aksiyon Komiks, for instance, had some of the greatest komiks novels of its time, like Mario del Mar’s Prinsipe Amante, as superbly illustrated by Alfredo Alcala, and Ang Kamay ni Hugo by Nolasco Panaligan. For a time the Aksiyon Komiks’ Prinsipe Amante series became a serious threat to Pilipino Komiks’ popularity. At about this time, however, a young Mars Ravelo started the popular Darna series, and Prinsipe Amante and Darna became the two most popular series being anticipated by Filipino komiks readers.

The komiks industry continued to grow. Old publishers were closing but more new ones emerged in their place. Some komiks changed ownerships but they continued to be issued. 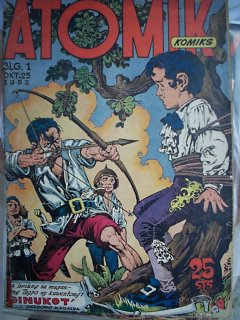 Atomik Komiks #1 with a gorgeuos cover by Sir Fred Alcala. What a cool title this komiks has!

By 1954, there were at least 20 or so komiks titles that were being sold in the newsstands. The Filipinos passion for komiks had reached an unbelievable peak. Komiks reading had become the Filipinos' national pastime. 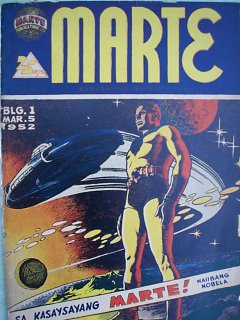 Marte Komiks#1 by Marte Publications Inc., Manila Philippines. Possibly the first all Sci-Fi komiks-magazine in the Philippines. Cover art by Nestor P. Redondo. I really loved the way Redondo composed this worms-eye view of the lead character! I am very impressed! 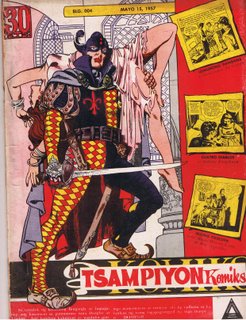 Posted by Dennis Villegas at 4:55 PM

To previous readers of this post: I have made some corrections on the titles and dates on some of the komiks, because I had been writing this during the peak of firecracker blasts in our neighborhood, and had been a little confused hehe. so if what you are reading differed on the first time you read this post, please be guided, thanks!

Hi Dennis!
Your collections are really impressive. How did you manage to get all these materials and information? What made you so interested with these old comics? I am also interested with old comics just because I want to see again the old comics I used to read when I was still young.
I hope you will publish a book on this comics history just like what you did on Kenkoy comics. I look forward to it.
More power to your site. I expect to see more suprising information and comic photos about Pilipino comics here.

As the son of one of the artists featured in this fine collection, I was immediately struck by the quality of the magazines, as well as the representation of the other artists.

It's good to know that someone out there has taken great pains to recognize these great talents and their place in the art world.

Thanks for sharing this with the world,

Thanks Bes,
Do you havew an email address so we can keep in touch from time to time?
Dennis