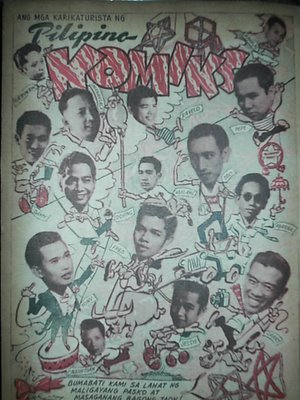 Here is an all-star caricature of the pioneer cartoonists of Pilipino Komiks. This wonderful page was drawn by Jose Zabala-Santos.

First row: on the upper left corner holding the "K" in Pilipino Komiks is Liborio "Gat" Gatbonton, one of my all-time favorite cartoonists. On the opposite direction was the muralist Amadeo Manalad.

Third row: Francisco V. Coching(still holding his brush and bristol); the fellow holding the roasted pig is Mauro Malang Santos; next to him is Deo Gonzales; the fellow with the shades is Lib Abrena.

Last row: Tony Velasquez is the circus impresario (being the founder of Pilipino Komiks!); beneath him is Lagim artist Cris Caguintuan; the man riding the carabao is Fred Carrillo; the fellow on the toy bike is Jessie Santos; last but not the least, the happy fellow walking the dog and holding a camera is none other than Larry Alcala, when he was a little thinner.

Merry Christmas to everyone!! And enjoy the season to the fullest!!

Posted by Dennis Villegas at 7:09 AM

Is this piece in your collection? Pwede bang humingi ng scan? Or is it for sale? Hehehe. Thanks Sir.

Ernie: Yes this is from my collection of komiks. This not an original page though, but a back cover of a 1948 Pilipino Komiks. Thanks.

Hi, thank you for featuring my grandfather, LIB ABRENA. I'm the youngest daughter of Mrs. Mignone Abrena-Balangue, the oldest daugther of Lib Abrena.

hi ate bebet... perhaps we can send the webmaster some of the other scanned comic strips of Lolo. Im the eldest daughter of the youngest daughter of lib Abrena, Zumbeline Abrena- Soriano

Very It’s Christmas again!! A time to cherish the beautiful white snow, smiling snowman, brightness of the Christmas décor and the yummy candies and cakes! From November onwards it becomes impossible to forget that Christmas is coming. Well to be honest I personally wait for it so that I can return home to meet my parents and girlfriend of course!
With the passage of time lots of things about the celebration of Christmas has changed. I still remember when I was a kid, mom use to wait near the phone so that she becomes the first one to pick my brother call. We all use to have a fight as who is gonna be first to talk to him. Then I use to visit my relatives and friends with my parents who stayed near by.But now the net world has changed everything, especially the ecard trend. It’s so easy now to connect with our loved ones especially when you have so many ecard sites! One of free Christmas ecard site Being a new website meme4u.com really has fresh and cool greetings. The best part is if I write too meme4u.com regarding some card or idea they do take it seriously. Although the site has several errors but meme4u.com cards are really cool! So guys why don’t you check it out, you will also get the right ecard you are looking for! And if any one of you knows any other fresh ecard website do let me know!

Wish all your friends and families and everyone around a Merry Christmas by visiting http://www.closeupfreshbreath.in a new unique way of sharing your thoughts and expressing your feelings.

This is such a nice Christmas greetings from our creative and talented cartoonists. Proud to be pinoy!

And since Christmas is just in the corner, start sending Christmas Cards to loved one and friends.