A History of the Liwayway Magazine

Don Ramon Roces’ figure loomed large in the history of popular publishing in the Philippines. If Tony Velasquez is recognized as the “Father of the Tagalog Komiks”, then Don Ramon Roces should rightfully be called its “Godfather”.

Of Spanish ancestry, Don Ramon came from an illustrious family that became prominent in the publishing business. His father, Don Alejandro Roces, Sr., was the recognized father of modern journalism in the Philippines.

In 1916, Don Alejandro purchased the fledgling Spanish language daily La Vanguardia and the Tagalog Taliba from their original owner Don Martin Ocampo.
The La Vanguardia was the descendant of El Renacimiento, a newspaper edited by Teodoro M. Kalaw, but the latter had to close it in 1923, in relation to the infamous libel suit filed by the American Dean Worcester.

By founding later the English Tribune in 1925(edited by the young Carlos Romulo), Don Alejandro had forged the links that established the newspaper empire in the Philippines. His newspaper triumvirate, Ang Taliba-La Vanguardia-Tribune, widely known as the T-V-T, had monopolized the newspaper industry of the pre war Philippines. The Taliba catered to Tagalog readers, the La Vanguardia to Spanish readers, and the Tribune to the English readers.

The T-V-T’s chief competitor was the DMHM (El Debate, Mabuhay, The Philippines Herald, and Monday Mail) newspaper chain of the Elizaldes, but these newspapers could not cope up with the circulation of the T-V-T, so that critics usually took the DMHM as to mean “Dito Muna Hanggang Meron”, to poke fun of the beatings these papers had to endure in comparison with the very popular T-V-T.

In 1922, Don Alejandro’s eldest son, Don Ramon, entered the reins of his father’s publishing empire. By building upon his father’s accomplishments, Don Ramon established a chain of vernacular magazines beginning with the publication of the Tagalog Liwayway in 1923.

The Liwayway was actually a re-issue of Don Ramon’s first published magazine, the Photo News, a news magazine jointly edited by Don Ramon Roces himself and the Filipino novelist Don Severino Reyes. 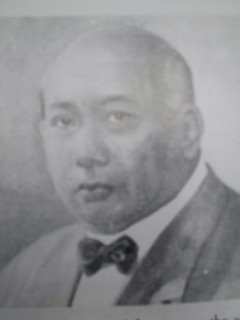 As its title implied, the Photo News was an illustrated magazine that contained news, essays, and prose and poetry.
Published forthnightly at 15 centavos a copy, the Photo News was written in trilingual sections: English, Spanish and Tagalog, presumably to cater to the major three language readers of the Philippines at the time, which were essentially the clientele of the T-V-T. Thus, English readers had only need of the Photo News’ English section; the Spanish readers its Spanish section; and the Tagalog readers its Tagalog section.
The readers who cannot read in any two of the sections thought that it was a waste of money paying for the other three-fourths of the magazine, which they could not understand. Thus the magazine did not sell very well and Don Ramon discontinued the magazine before the year was out. Frustrated, he went to Mindanao as a self-exile, and for a while, contemplated on establishing a coconut plantation there.
Being a vibrant young man, Don Ramon immediately felt homesick, and missed the hustle and bustle of city life. Three months later he was back in Manila. He learned his lesson, and now with a revived interest in publishing, called back Don Severino Reyes to resurrect Photo News, this time in pure Tagalog language. They established its new office in Calero St., a few blocks away from the Don Alejandro’s T-V-T building.

On the front page of the first issue of Liwayway, dated November 18, 1922, Don Binoy greeted his past “patron” readers of the ill-fated Photo News, as well as the new magazine’s prospective sponsors, and announced the new look and contents of their resurrected magazine: 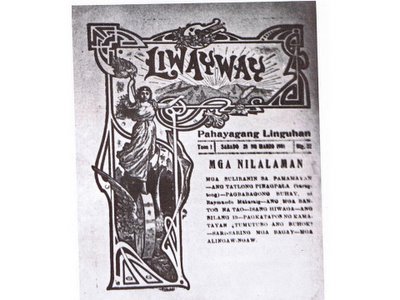 A 1923 issue of the Liwayway. Author's collection.

Don Ramon and Don Severino made every effort to ensure that the Liwayway would not suffer the same fate of their ill-fated Photo News. Published weekly, the Liwayway’s cover price was tagged at 12 centavos, or 3 centavos cheaper than the forthnightly Photo News. It also had 40 pages, in contrast to the Photo News’ 28 pages, and it carried more pictures and illustrations.

A 1931 original cover art of the Liwayway by Tony Velasquez. One can readily see a heavy influence of Amorsolo on Velasquez early style. Author's collection.

In its early issues, the Liwayway carried the same typeface and overall design of the Photo News, but it was a considerably enlarged magazine. It also featured local and foreign news, as well as an expanded section on essay, short fiction and poetry.

It was in the pages of Liwayway where Don Severino’s “Mga Kuwento ni Lola Basyang” appeared. The “Lola Basyang” stories eventually became the most-widely read prose feature of Liwayway. For many years, readers mistook the real “Lola Basyang” as an old woman with loadful of ancient stories stuck in her ancient baul, only to find out later that she was actually a he, and a fat and balding one at that. 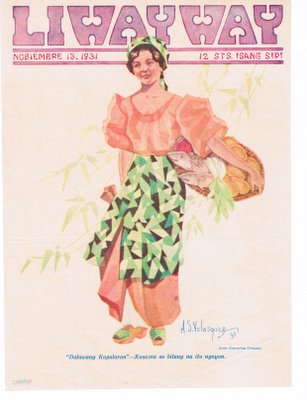 This is the offset print of the original art shown above. Author's collection.

Don Severino recruited some of the literary giants of the time as regular contributors to the Liwayway. They included the poets Jose Corazon De Jesus, Florentino Collantes, Julian Cruz Balmaseda, Cecilio Apostol, and the writers Lope K. Santos, Inigo Ed Regalado, Romualdo Ramos, Francisco Laksamana, Fausto Galauran, and Don Binoy’s own talented son, Pedrito Reyes, who later succeeded his father to the magazine’s editorship.
Thus, even though the Liwayway was basically intended as a magazine for the man on the street, yet its prose and poetry was considered the best Tagalog literary output of the era. Some of the great Tagalog literary novels produced in those years were serialized in the Liwayway, many of which became classics in Tagalog literature.

To make the Liwayway more visually appealing, Don Severino recruited some of the best layout designers and artists of the time, which included among others Procopio Borromeo, Jorge Pineda, Jose V. Pereira, P. V. Coniconde and Antonio Gonzales Dumlao.

The Liwayway also became the vehicle for some of the Philippines early comic strips, like Tony Velasquez' Ang Mga Kabalbalan ni Kenkoy, J.M. Perez' Huapelo and Pamboy at Osang, Francisco Reyes' Kulafu, and Deo Gonzales' Isang Dakot na Kabulastugan. These became the starting point for the comics industry that later flourished in the Philippines/ 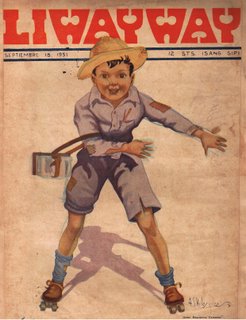 A 1931 issue of Liwayway with a beautiful cover art by Tony Velasquez. Looks like Velasquez was influenced here by the American artist Norman Rockwell. Author's collection.

The Liwayway’s commercial triumph prompted Don Ramon to launch a sister Tagalog magazine, Hiwaga, in 1926. A year later, an English weekly, The Graphic, was published. Soon, other vernacular magazines in the other dialects of the Philippines came out in succession: Bisaya in 1932, Hiligaynon (Western Bisaya dialect) in 1934, Bikolnon in 1935, and the Ilocano Bannawag in 1940.

So popular Liwayway had become that Don Ramon decided to publish a thicker monthly supplement called Liwayway Extra beginning in 1936. At this time, Tony Velasquez was already promoted as Chief Artist of the Liwayway. The Liwayway Extra had more pages and more comic strips than the weekly Liwayway. 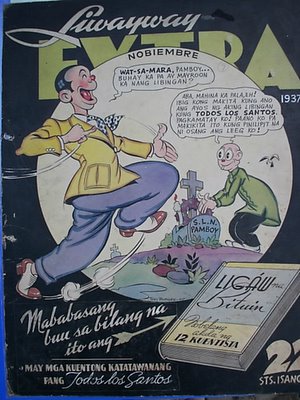 During the Japanese Occupation, the Japanese Imperial Army confiscated the Liwayway. The Japanese continued Liwayway's weekly publication, knowing how much they could use the magazine to propagandize their occupation agenda. Kenkoy, the most popular comic strip in the Philippines at the time, was allowed to continue, but now the famous funny man would only mouth President Laurel's health and educational policies. In 1945, after the liberation of Manila, the Americans took over for a while the Liwayway, publishing it in pocket form due to the shortage of paper. 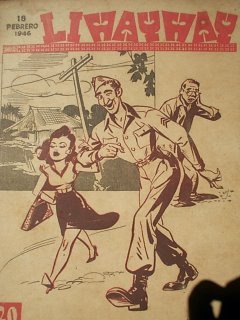 Liwayway after the Liberation of Manila. This cover poked fun at an American GI. Regarded by Filipinos as heroes, the GI had won the admiration of the Filipina women.

In 1946, the Liwayway was returned to Don Ramon Roces. 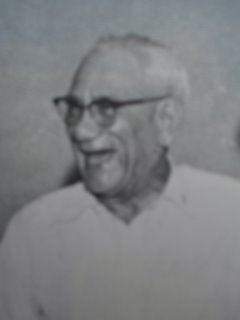 In 1965, the aging Don Ramon decided to retire from publishing and sold the Liwayway to Hans Menzi, founder of the Manila Bulletin. Since then, it had changed ownership at least two more times, but still the magazine, owing to its popularity with the masses, continued publications. Surprisingly, this year the Manila Bulletin re-purchased the Liwayway. One can only wonder if in the future, the Roceses would also repurchase the Liwayway. Well, anything can happen indeed.

Posted by Dennis Villegas at 4:22 PM

If you want anything scanned, let me know kasi may malaki na akong scanner and I can scan 11X17 artwork in one go. Wala nang dugtong dugtong!

Chris:
You should read the book..ROCES FAMILY: PUBLISHERS by D.H. Soriano.
However, this book is only privately published and has not been available in bookstores so I don't think you've read that.

My mother have pages of my grandfather's writing as Spanish editor before Liwayway.

Do you have scanned images of editorial pages?

hi...ammmm can i get a copy of some poem and essay na mkikita sa liwayway magazine...plsss i really need dat wala kc akong mhanap eh..tnx poh

my Grandfather was one of the writer
of liwayway magazine and im looking for some of his story. He is not just a writer he even became an editor-in-chief of this magazine in the year 1954 if im not mistaken.My father told me that his pen name was G.S.Bautista his real name is Gerbacio Santiago.
pls i need a reply for thisthanks!!1
God bless!!

my Grandfather was one of the writer
of liwayway magazine and im looking for some of his story. He is not just a writer he even became an editor-in-chief of this magazine in the year 1954 if im not mistaken.My father told me that his pen name was G.S.Bautista his real name is Gerbacio Santiago.
pls i need a reply for thisthanks!!1
God bless!!

hi mr. villegas! as part of my dissertation research, i've been to archives in the US, japan, and the philippines but haven't found war time liwayway issues. i was wondering if you have issues of around december 1943. i just want to confirm if an article by a famous Japanese philosopher, miki kiyoshi (三木清), was indeed translated into tagalog and published in late 1943. the article's title is "Oriental Character of the Filipinos". hope to hear from you sir.

wow..i was a fanatic of this mag since I was in grade two..when my mom left the country for work abroad..this used to be my past time..i am so glad to view the previous covers..

the people behind Liwayway magazine-writers and illustrators, though most of them are now aged,if not deceased, are far more worthy and qualified to be named as national artists than carlo caparas and cecile guidote.

Hi guys, I have a very huge collection of Liwayway magazines that i need to sell. It dates back from the 1940's to 1960's It's my grandfather's collection cause he has an article in Liwayway. He is Benavuentura Medina JR. Can you guys give me ideas where and how much i can sell these magazines?

Michael Medina: I'm familiar with your Grandfather's writings. Can you email me @philippinecollectibles@yahoo.com or contact me at 09087275818